TI-59 how it all started 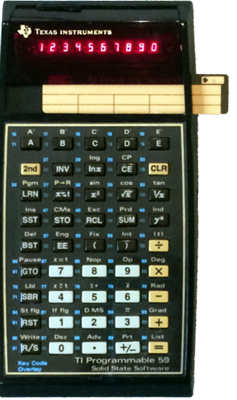 I'll won't forget the day, when I first saw this machine. It was 1977 and I needed a new calculator for my 7th class in school. My parents decided to look in a supermarket called Metro, that, at that time, was only available for enterprisers, merchants, gastronomy and folks like that. So my expectations were not too high (actually, I felt it was a waste of time), and was looking around more frustrated and bored in the department for office stuff, when suddenly, between paperware and rulers, my eyes were caught by the word Programmable written across an ad for a brand new series of calculators.

Below, sitting on their boxes, were two shiny black futuristic devices called TI-58 and TI-59. Two magic black boxes with lots of keys and a mystic transparent overlay with blue numbers.

One of my favorite books at that time was about cybernetics. I used to read it over and over again, and I even built a 'computer' with tons of wire and light bulbs when I was 13, and 'programmable' ment connecting contacts with wires until the batteries were screwed.

To make it short, I denied to leave the shop without this unbelievable device. My parents always were very generous people, and after a long glance at the price, that was even more unbelievable, they agreed.

Since this day, the TI-59 became my indispensible companion. Even when I got a C=64 three years later, the fascination stayed. It was not only the first real computer, it was truly portable, truly handy, and built to last. In the late 90s, nearly after three decades, the batteries finally stopped working. When I learned that no replacements are available, I purchased a blister packed plastic brick called TI-89, tried a few days to use it and then dropped it in a lower drawer of my desk.

It was in January 2014, when I came across a worn box while doing one of those a rare cleanings in my office room. The TI-59. With all booklets, magnetic strips, the Library and the Leisure modul. Everything still intact, clean and shiny. No corrosion on the contacts. Built to last. Only the batteries. And I decided to bring my beloved gadget to life again.